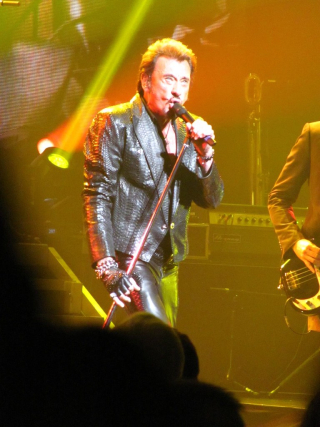 “Johnny Hallyday, known as the French Elvis, built his six-decade show business career on old-fashioned rock ’n’ roll, but he also kept up with the times technologically.”

The French rocker started using Instagram in 2012 and shared a mix of his personal and professional life with fans. Instagram has now helped two of his children defeat his widow in the first stage of an estate battle for an estate that the French news media values at tens of millions of dollars, reports The New York Times in the article “French Rock Star’s Instagram Defeats His Widow in Inheritance Battle.”

When Mr. Hallyday died in 2017, two testaments were found in a safe deposit box. One, which was written in Los Angeles, appointed his wife Laeticia as sole heir and manager of his estate. The will completely excluded his grown children from two prior relationships, David Hallyday and Laura Smet. This is not permitted under French laws of inheritance.

The two children have been fighting to prove that their father lived most of his life in France, and not in the United States.

Laeticia, who was the singer’s fourth wife, told a court outside of Paris that Johnny had settled in Los Angeles in 2007, their daughters Jade and Joy went to school in Los Angeles and he had received a green card in 2014. Court documents also reflect her telling about his fascination for Elvis Presley and American culture.

However, his son David offered something that was a bit more concrete: a chart of where the couple spent their time from 2012 to 2017, based on Johnny’s Instagram posts.

The chart revealed that Johnny spent at least 151 days in France in 2015 and 168 days the year after. He then spent eight straight months in France, mostly because of his illness, before his death in 2017.

The court accepted the children’s argument, ruling that it, and not an American court, had the competence to make decisions on Johnny’s estate.

The battle over the inheritance includes the performer’s rights on more than 1,000 songs, as well as properties in France, California and on St. Bart’s in the Caribbean. The French public has been fascinated by his life and now, by the estate battle. An estimated 15 million people watched a tribute to him in Paris after his death, when he received a hero’s tribute.

This case is an example of how social media and the law intersect. As we live more and more of our lives online, social media posts are increasingly being used as evidence. The newness of the material is similar to what happened in the early 20th century, when the telephone was still relatively new and the admissibility of conversations on the telephone as evidence, was still being debated.